On the third day of my Spring 2015 road trip, I arrived in Jackson.

( Read more about the scientific aspects of my road trip on Cicada Mania. )

My destination was the Mississippi Museum of Natural Science (2148 Riverside Dr, Jackson, MS). The location was particularly vexing for my GPS, which led me through a maze of lumpy streets, the surface of which rose and fell with an amplitude of about a half a meter. It was as if I was driving over frozen waves or ski slope moguls.

( An aside: My in-dash GPS is good, but it isn’t great. It probably isn’t as great as Google/Wais is, but I’m not going to risk my life and the lives of others squinting at a cellphone screen or juggling one in my hand while I drive. I do use Wais when I’m stuck in traffic though. )

The Mississippi Museum of Natural Sciences

The Mississippi Museum of Natural Sciences was nice. Their best attractions were their live fish, reptile, and amphibian environments. They had a two-headed snake and more cute baby alligators than you can imagine.

The live fish exhibits were particularly fascinating and enchanting. Definitely, a perfect atmosphere to chill out in after a long drive on a hot day.

Trails behind the museum led to the LeFleurs Bluff State Park. The trails wound through what seemed like miles of woodland, past alligator infested lakes and the Pearl River (which I will assume is also infested with gators). My “desk potato” body was out of breath by the time I navigated all the trails and returned to the Museum.

Here’s a video of some of the many natural wonders you’ll find in LeFleurs Bluff State Park:

Maybe it is wrong to say “alligator infested lakes”. It is their home and has been for millions of years.

Needing a place to stay, I found the nearest Hilton, and said: “I’m a Hilton HHonors member, what have you got for me”? ( Two h’s in HHonors, BTW. ) Membership has its privileges and I got a penthouse suite, floor 14. Great view of the city. I liked that the desk chair looked like it was made in the 1960s.

If “classy” has a spectrum, the Jackson Mississippi Hilton falls on the “swank” side of the spectrum, rather than the “posh” side. This is the room: 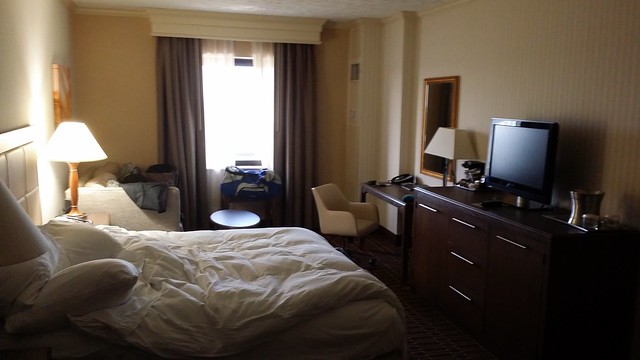 It’s “swank”, right? Look at this chair. That is a swank chair.

The highlight of staying in the penthouse suite was that Ms. Diva was in the suite next to mine. How did I know Ms. Diva was next to me? Her Bluetooth name gave her away. I got to meet Ms. Diva in the hallway, and she looked like Janet Jackson, which seems appropriate.

I was amazed by the number of pickup trucks in the parking lot of the hotel. Pickup trucks seem to be the new SUVs — everyone has one because they’re handy for hauling shit back from Costco and Ikea.

After deliberating where to eat for about three hours, I settled on Dracos’s which is a seafood joint in the same parking lot as the hotel.

Draco’s claim to fame is their charbroiled oysters. In the spirit of trying everything at least once, I gave them a shot. And guess what: they’re freaking amazing. Oyster + butter + parmesan cheese + charbroiled flavor = amazingly delicious. I can’t lie.

How Lucky I Am

I was done exploring LeFleurs Bluff park & the museum, I’d met Ms. Diva, I’d had amazing oysters, so it was time to go. I stopped by a chain pharmacy (can’t remember if it was a CVS, Rite-Aid or Walgreens, and not that it matters) to load up on water, Red Bull, and some snacks. At the front of a checkout line was a gentleman in a wheelchair. He did not simply have a broken leg; it was apparent that he suffered from considerable physical and neurological disorders. Every moment of his transaction with the cashier was a struggle; finding the change, handing it to her, holding the soda he had purchased — all a struggle. A second and third cashier opened their registers, and the rest of us customers were able to check out quickly. I left before the man in the wheelchair and turned back to notice that he was stuck in the automatic doors. I held the door open for him, and he was finally able to leave.

I am thankful for how lucky I am to have been born with a relatively sound mind and body, and that I am able to drive around the U.S., pretty much anywhere I want to go without much effort or resistance. I’m a lucky guy.