It took me a year to write about Scope Miami 2019. Nothing was preventing me from writing, but since I did nothing cool in 2020 (I think you know why), it feels good to reflect back on the fun I had last year.

So what’s it like? A huge gallery of galleries on the beach in South Beach, Miami, filled with contemporary art from around the world. Like a museum on the beach. With a bar, and a dancefloor with a DJ. Some of the best art you’ll ever have a chance to see, and buy, and some of the most beautiful people on earth (that’s South Beach in general). Much of the art is similar to what you’ll see in magazines like High Fructose & Juxtapoz. It’s a candy-coated feast for the eyes.

Here’s the entrance, with the color-gradient yard art by Hot Tea:

The highlight of the show was by Asbury Park, New Jersey artist Porkchop, presented by  Jenn Hampton of Parlor Gallery:

Colorful money & a mirror ball in the party room. I don’t know the artist, but the gallery representing them was in C15.

Don’t sit on the King’s Tongue!

Balloon Heads (I don’t remember the artist) on the beach.

Metal & fur Moth. (I’ll add the artist and gallery when I figure that out). I liked this one quite a bit.

Laurina Paperina’s cartoon-based art was excellent & hilarious, and her parody of Maurizio Cattelan’s $120,000 duct-taped banana was funny as well:

I don’t have a photo here, but I liked artist Yuka Mitsui’s Japanese-style woodcuts of Eddie from Iron Maiden and Tim Conlon’s graffiti train car models that Roman Fine art had on display.

Here’s the full list of exhibitors and the virtual tour. There were other art fairs happening in Miami at the same time: notably Art Basel & Design Miami (which still happened in 2020 regardless of the pandemic).

December 5-8th, 2019, I visited Miami Beach for the Scope and Art Basel art fairs. I stayed at the El Paseo Hotel (clean, cozy, homey) on Española Way. I got breakfast from a local bakery, dinner from 5 Guys. When not at the art fairs, I enjoyed the beach and exploring the town. I recommend it, but definitely bring someone with you to enjoy it with.

Sunrise, palm trees, a big beach with coral & shells to beach comb, swimmable & crystal clear water: what more can you ask for? Miami Nice (yeah, I said it).

The lifeguard stations are a trademark of South Beach. They come in different shapes and sizes, but they’re all pink.

Where my hotel El Paseo is. Lots of restaurants & a gelato shop.

Mannequins in the Surf Style window

There are a lot of souvenir & bathing suit shops in town.  The mannequins accurately reflect the local visitors of South Beach. Nearly everyone looks like a model — I felt like an ogre next to them (but also, I do not care).

Each bar, hotel & restaurant in the Art Deco district was illuminated with a different color of light: orange, green, purple, blue, red — like a pack of colored crayons. The hum of celebrating people, dance music, and the roar of supercars filled the air.

And of course, there’s the Egg.

Not part of the photo set really, but this was the coffee/library room from the El Paseo hotel circa December 5th, 2019.

The long trip, looped through 19 states.

The short trip was to Raleigh & Chapel Hill, NC.

These are my stories:

It is impossible to write about Raleigh, North Carolina without mentioning the Crepe Myrtles.

Crepe Myrtles (Lagerstroemia indica) are flowering trees imported from Asia. They seem to average about 10 feet in height, come in pink, red, purple & white, and are literally everywhere in the Raleigh area.

The sheer number of crepe myrtles is shocking. Now you’re thinking that I’m being hyperbolic, but I’m not. If you live in the area, you’re probably numb to it: “the sky is blue, the grass is green, and everything along the sides is pink.” But for an outsider driving into North Carolina, the experience is sort of like the “Stargate” scene in 2001, a Space Odyssey, but instead of a stream of colored lights, it is a stream of flowering trees.

If that reference is to obscure, just imagine driving through a pink tunnel made of flowers.

I stayed at a Best Western in Garner, NC. The hotel was fine: pool, “lobby breakfast”, quiet, comfortable rooms, and plenty of parking. Garner, NC, the city, is essentially a highway encrusted with strip malls and big-box stores, surrounded by a web of winding, hilly forest roads. That is my perception of it. I visited the local Walmart to check out the locals. While the Walmart did not have the bins of fireworks that I was hoping for, they did have isles of snack cakes, beer (which let to this), and the hairbrush & computer mouse I needed.

An UTZ truck in the parking lot of the Walmart: 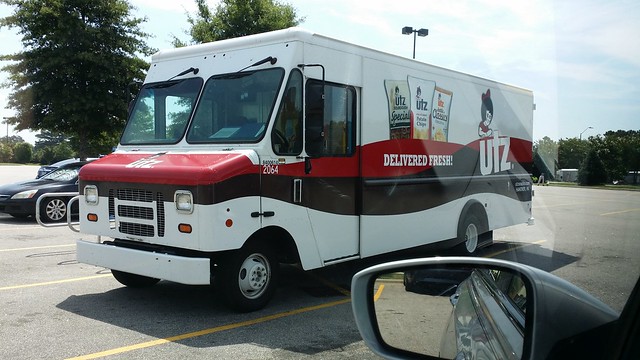 The first thing you notice when approaching the museum is the massive planet Earth/globe. It is massive enough to be mentioned in Roadside America:

Inside the Museum you’ll find four floors of Natural Science exhibits, most if not all, focused on North Carolina fauna, flora, and geology. The massive whale skeletons, and arthropod zoo, were most impressive. 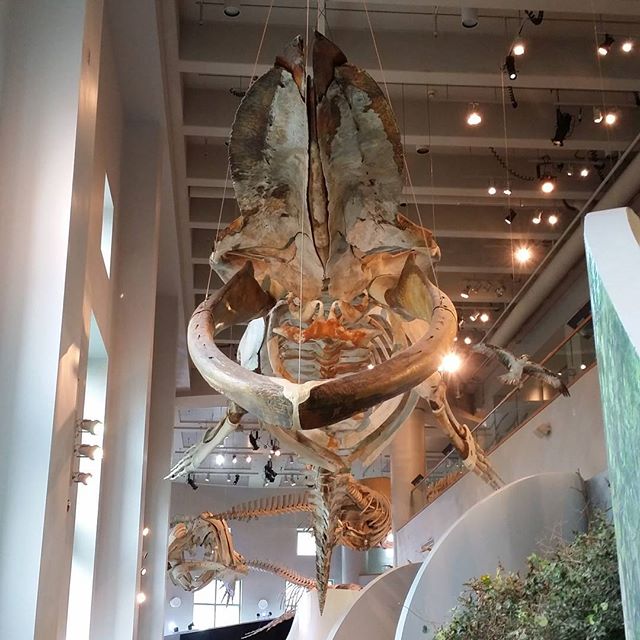 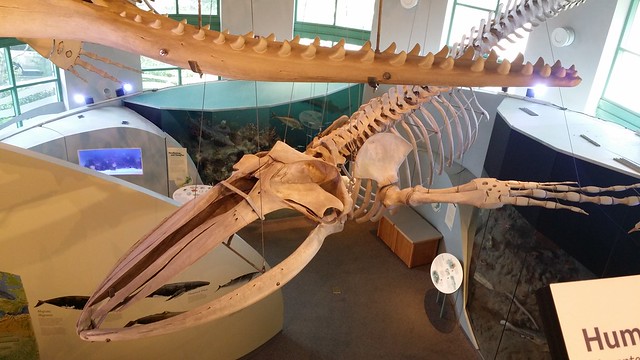 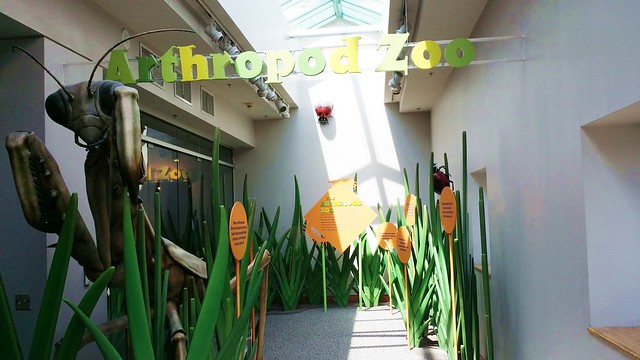 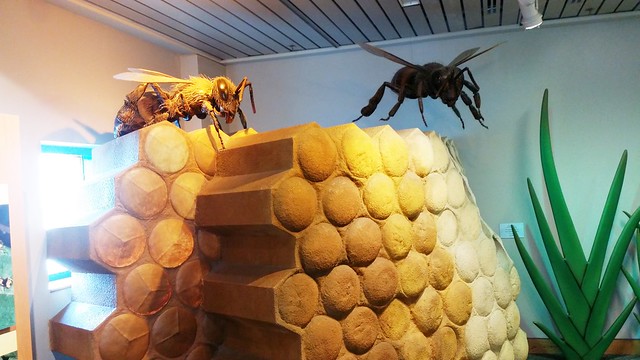 Other than that I also was impressed by:

Fox squirrels are massive — almost size of a house cat — I did not know that. 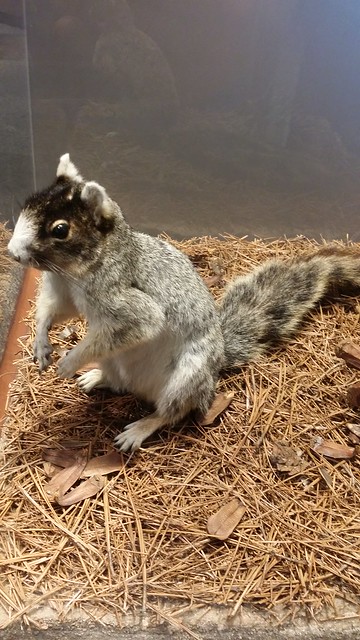 When visiting a city, I like to walk around the town without a plan or compass, with the goal of stumbling upon some interesting sights and experiences. I like to visit the stores & restaurants locals frequent; sit on park benches and observe the local vibe like a local would; try to see the city through a local’s eyes.

During my three hour ramble around Raleigh, I discovered a giant acorn, a sand castle 200 miles away from the ocean, and world-famous Clyde Cooper’s BBQ. Clyde Cooper’s BBQ had pork skins, which I get for my sister’s chihuahua from time to time. The chihuahua is passionate about eating parts of other animals. 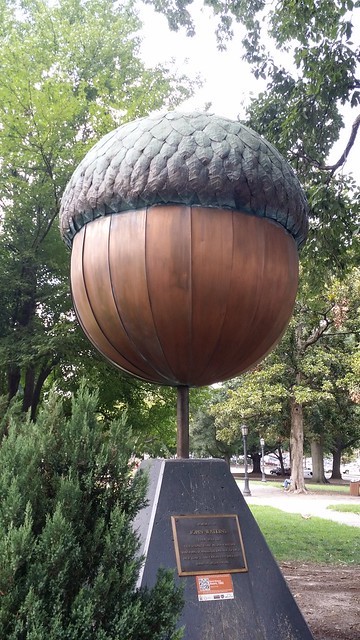 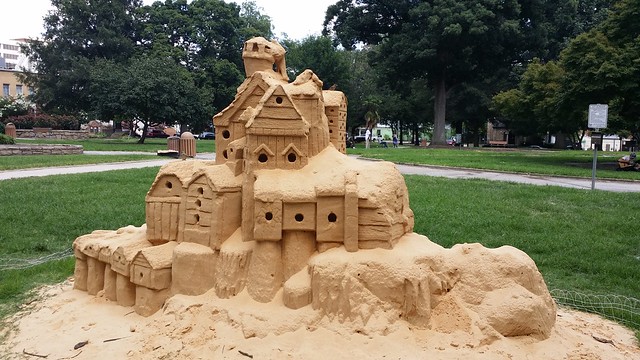 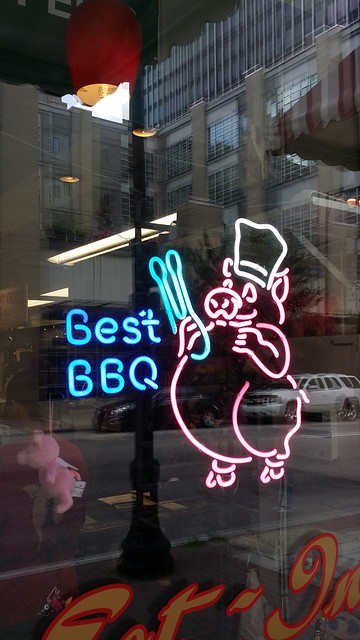 It is worth mentioning that I visited Raleigh right after all Confederate flags and memorabilia were removed from State/Government buildings, including museums. Had I visited weeks earlier, I may have had a different experience.

These are the rules of POWER VACATION!

I’ll probably add to these lists, but you get the idea.