I covered the basics of the The House on the Rock, its creator Alex Jordan, and its “Area 1”, in a previous post (entrance, the Original House, the Infinity Room). I’ll discuss Area 2 in this post, and area 3 in a subsequent post.

Area 2 begins with another outdoor transitional area — a small pond and mill wheel — which leads to the Mill House. Stop for a moment and think about how Alex Jordan put a pond on top of a giant chimney of rock…

Next comes the Streets of Yesterday, a replica of the downtown of an 18th or 19th-century town, with shop after shop reconstructed down to the most minute detail. If you’ve seen the Harry Potter movies, it’s very much like the town where Harry obtains his wand — winding streets, dimly lit, windows framed with a dark wood framework, each shop stocked and decorated with precise detail. The Street leads to several automated, robotic machines. Deposit a token and get your fortune told, or hear a song played by a gigantic, steam-powered locomotive calliope. The Streets of Yesterday appear to be the first area of the House on the Rock specifically built as a tourist attraction. The Original House was built by Alex Jordan for himself, but the rest of the House on the Rock is Alex sharing what he loved with the rest of the world. 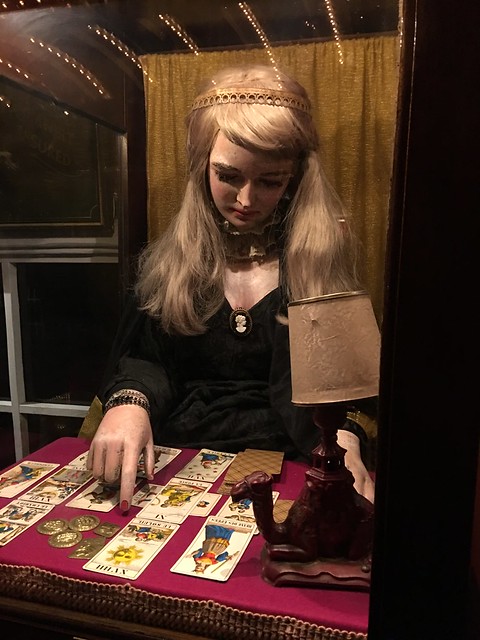 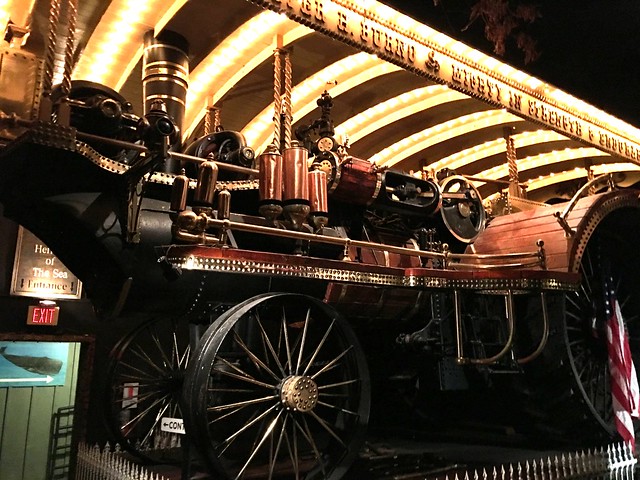 The photos I’m adding to my posts about the House on the Rock really cannot convey its magnificence. They don’t accurately portray the scale of the House, the lighting, and of course not the sounds (a huge part of the House), the temperature of the air, the smells, and the energy and excitement of the other tourists around you. Every photo you see — try to imagine it 4 times larger than you think it would be. Try to imagine yourself within it.

After Streets of Yesterday comes Heritage of the Sea. This was my first “Wow! out loud” moment. Imagine a wing of a three-story shopping mall, with every store-front replaced with display after display of intricate ship models and maritime artifacts — boat parts, anchors, diving suits, military items. In the middle of this, is a massive, life-size sculpture of a squid attacking a whale. The whale & squid are larger than the Statue of Liberty — that is how huge they are. HUGE. An inclined path winds around the perimeter of the sculpture, with the maritime artifact display on your left, and the whale on your right. 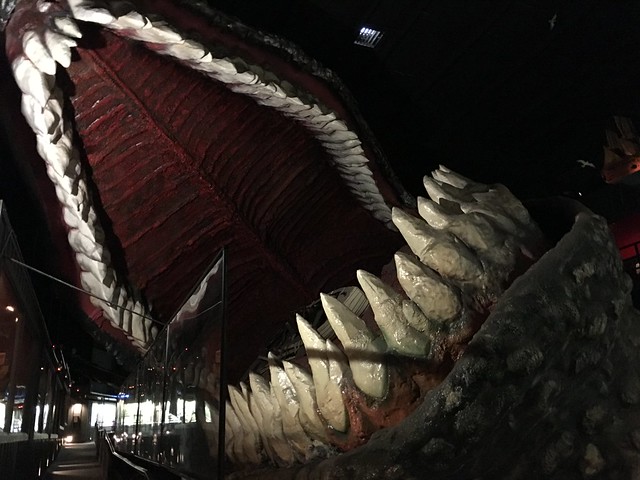 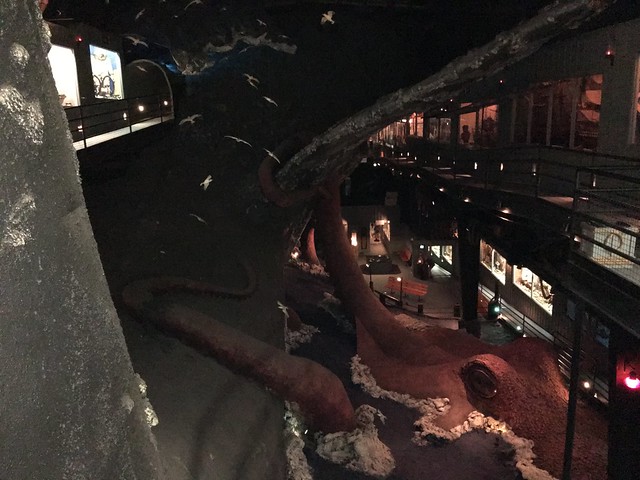 Next comes the Tribute to Nostalgia, Music of Yesterday, and Spirit of Aviation. Hallways filled with showcases featuring pop-culture items (like Spittoons) lead to a large room featuring large displays of large items: a massive steam engine, multiple cars, including one covered in tile instead of paint, massive neon signs, and even a house filled with a collection of photo cameras. This area reminds me of the show American Pickers — it’s like everything they picked ended up in this area of the House on the Rock. 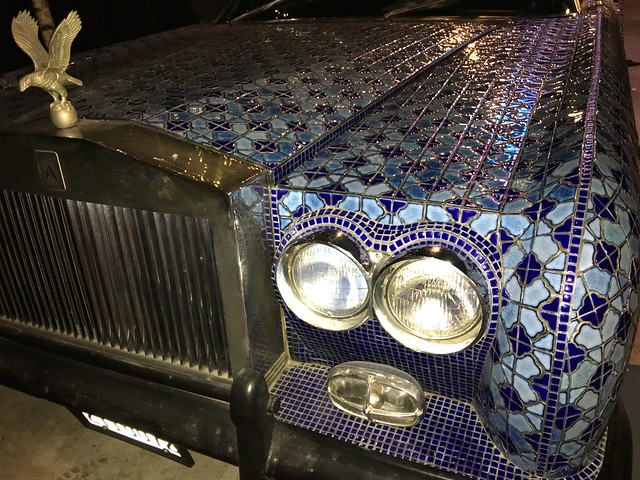 There’s a restaurant at this point, so fill up on food and beer if you need to. At this point, you’re about halfway through…

The Music of Yesterday features multiple room-sized automated, robotic bands — all of which you can play with one of your tokens. Each room is exquisitely decorated with ornate furnishings, many are draped in red velvet, lit with red and golden chandeliers (except the Blue Room), and some are inhabited by a cast of robotic musicians. These displays are amazing to look at, but their true magnificence lies in the automation that powers the music played by the robotic bands inside each room. I’m not sure if it’s steam, pneumatics, electronics or a combination of all three, but I’m pretty sure each runs off of the same type of paper-roll musical program that self-playing pianos utilize. Not only are these displays robots, but they’re also the forerunners of computers. 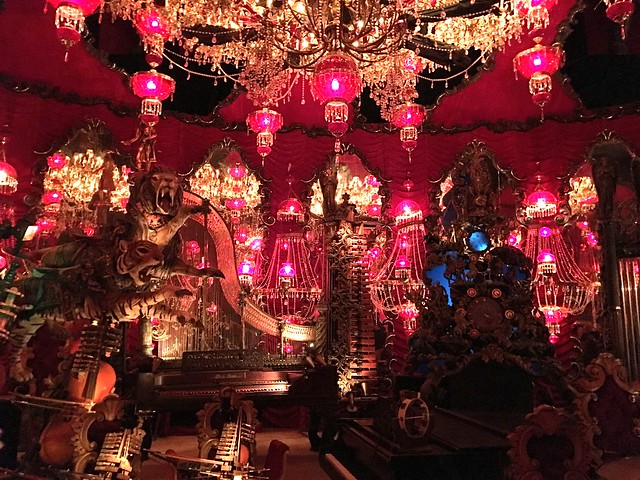 The Spirit of Flight is similar to the Heritage of the Sea, but instead of maritime artifacts, there are aviation artifacts and models of planes. 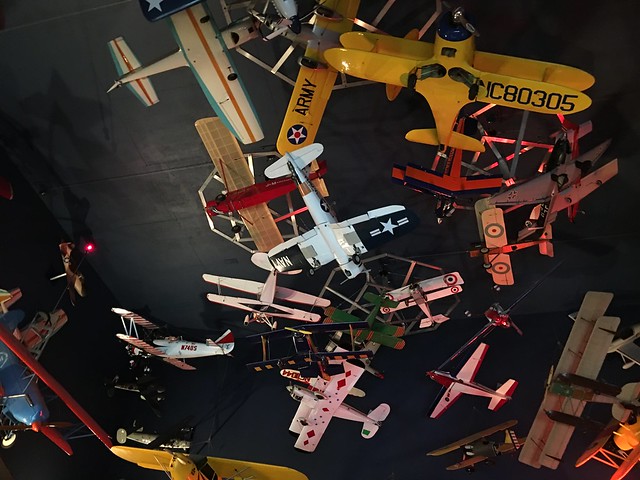 The next WOW! moment comes with the Carousel room. A carousel, for those that don’t know, is a rotating carnival ride, featuring a variety of animal sculptures — typically horses — that you ride, illuminated by incandescent bulbs of light, accompanied by festive calliope-style music. It’s a fantastical device, and typically the most magical and enchanting ride at a fair or carnival. The carousel a the House is the world’s largest, and likely the most magnificent. Common themes experienced so far in the tour of the House coalesce in the form of the Carousel: the vibrant reds, the festive, automated music, the use of lighting to create dramatic moods, and life-like sculpture.

Sadly, you cannot ride it. 🙁 It’s for your ears and eyes only. 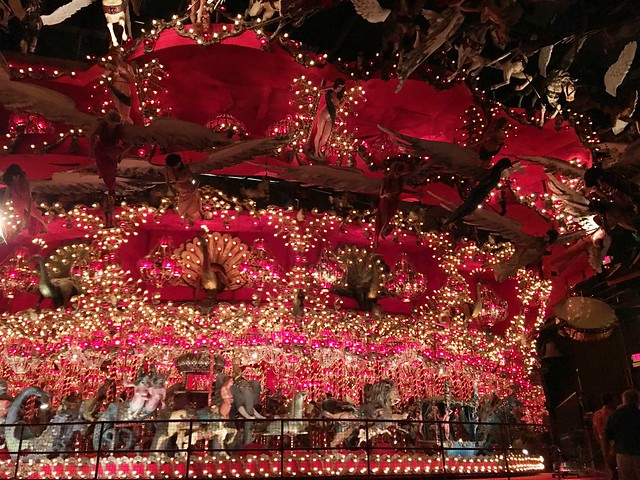 The difference between the Carousel and the rest of the House, so far, is it introduces fantasy into the displays. Look closely at the animals of the carousel and you’ll see that many are not the typical horse or zoo creature: chimeras, sea-demons, and centaurs spin round and round. Look up, and you’ll see Valkyries and Harpies. Many nude or partially nude. Some will blush. The Carousel represents a transition from the real (Streets of Yesterday, Heritage of the Sea, Spirit of Aviation, Tribute to Nostalgia) to the unreal — from the concrete to fantasy.

On the left side of the Carousel room is a dragon’s mouth — and what is more fantastical than a dragon — which leads to Area 3. 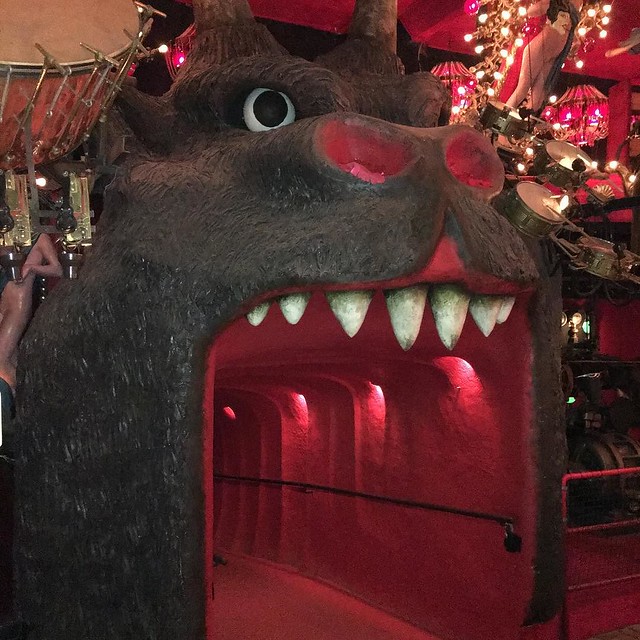 This tribute to the House on the Rock with continues in part 3.