New Jersey has many massive & memorable business mascots, including Margate City’s Lucy the Elephant and Asbury Park’s Tillie. My personal favorite promotional character is Calico the Clown: an enormous, primary-colored clown, located at 853 Route 35 North, Middletown, NJ. Calico now stands before a Spirits Unlimited liquor store, but he once was the mascot of Food Circus Super Markets, Inc., a company that operates a bunch of Foodtown supermarkets (more info). I can see the connection between “Food Circus” and a clown, and … liquor makes folks “act like a clown” as well.

Calico has garnered the unfortunate name “the Evil Clown of Middletown”. The look on his face conjures up terms like wily, scheming, bemused, or vexed. His eyebrows are reminiscent of the Rock’s “people’s eyebrow” – but with both eyes. I don’t see “evil” when I look at Calico. I see a complex individual, often misunderstood and under-appreciated, stoic, with a healthy disdain and sense of humor about the world around him. I guess I see myself in Calico. 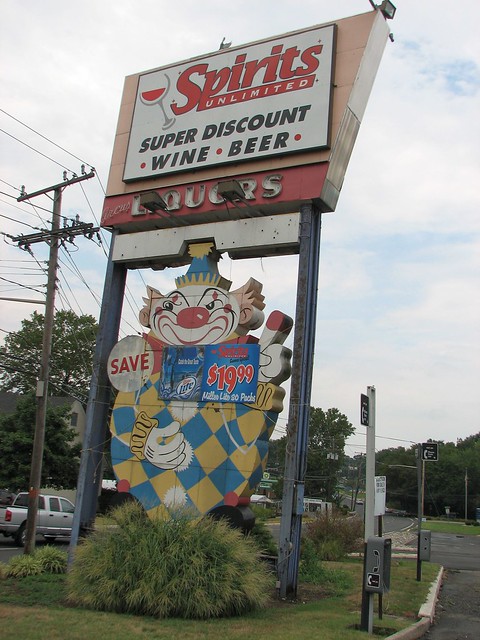 The clown has been profiled by Weird NJ and Roadside America over the years. There is a Facebook page dedicated to preventing his destruction (Save Calico, The “Evil Clown” of Middletown, NJ). There are even songs about him.

One “controversy” with the clown is: “what is he doing with his right hand?” Some dirty-minded folks say he is making a lewd gesture. He is — or at least he should be — holding a balloon string. The “SAVE” circle on the sign is actually a balloon:

Also, note that the original drawing of Calico features all 7 chakras:

It appears that his third eye was omitted or removed from his roadside manifestation. I also wonder why they chose to paint his finger red.