My Hocking Hills story beings as many of my travel stories do: mapping periodical cicadas. I had heard that Hocking Hills park in Ohio was a hotspot for the rarest of the three 17 year cicada species (Magicicada septendecula), so I traveled there to check it out. The reports were true… the cicadas were there in abundance… but no one had told me about the cave.

I’m a sucker for a good cave. I see a sign for a cave and I’ll drive 100, no, make that 200 miles to see that cave. Case in point: Mammoth Cave National Park, Kentucky. Back in 2014 I was in Cincinnati, started heading home (east) for New Jersey, but the next thing you know I’m 208 miles south at a cave! Sure, I stopped at the Jim Beam distillery along the way, but I ended up at a cave.

While wandering through the Hocking Hills state park — clutching my video camera, listening for septendecula, trying not to stand out amongst the dozens of tourists milling about — I saw the sign: “Old Man Cave”. Suddenly the sounds of cicadas dissolved from my mind and all I could think was “cave”.

That’s the third paragraph that ends in cave. Get the point?

Surprisingly Old Man Cave is not a “traditional” below ground cave. It is an above ground cave, because it has no ceiling. Perhaps it had a ceiling at one time; perhaps it collapsed. Had you asked me, I would have guessed that it was actually a canyon. As you’ll see from my photos and video, it still looks like a cave — limestone rock sculpted by the erosion of water — but it also looks like a canyon.

To get to the cave you have to enter a tunnel (the most “traditional” cave-like part of the journey). At the mouth of the tunnel were two healthy-looking young men; before I could enter, one stopped me. “Are you sure you want to go into the cave? It’s a hard walk even for me.” He advised me to go through the tunnel, enjoy the view, and then turn around and go home. He wasn’t an employee of the park — just another tourist.

I had to pause, if just for a moment, and ask myself: “how decrepit is my appearance?” Yes, I know I look like Lucious Malfoy: clearly middle-aged, with bone-white hair. And certainly, I could stand to lose a few pounds (more like 20). “How feeble and near death do I appear?”

I thanked the young man for his advice and concern and entered the tunnel. Upon exiting, the view was amazing. It’s hard to capture the magnificence with a photograph. To the right there’s a massive limestone overhang, slick with moisture and stained with streaks of green algae; straight ahead the cave/canyon drops maybe a hundred feet to the cave floor. It’s spectacular. At that moment I thought, “I have to do this; I have to experience this, even if the young man is right and I will die trying.” 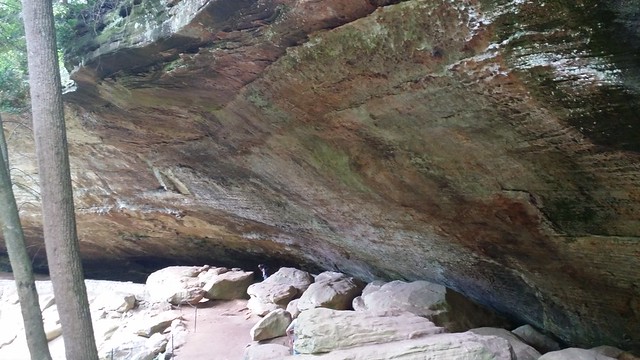 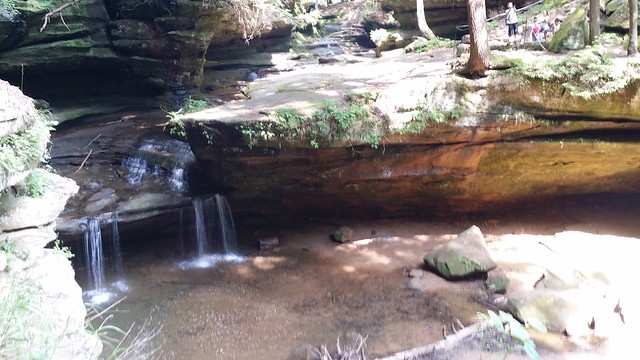 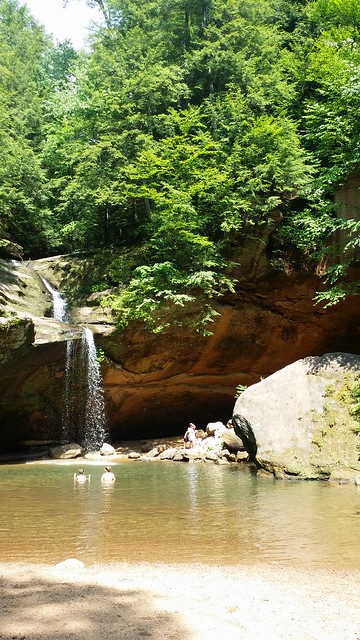 The hike down is long, and the hardest part is maintaining your balance and not falling to your death while taking a photo. Core strength is important. The hike up requires leg strength and stamina, but it isn’t all that bad. There were a few septuagenarians and little kids hacking it — it was fine. No worries.

Video from my hike:

After the Old Man Cave, I took a break… grabbed some water… made a video of some bugs…

And then walked across this funky looking bridge… 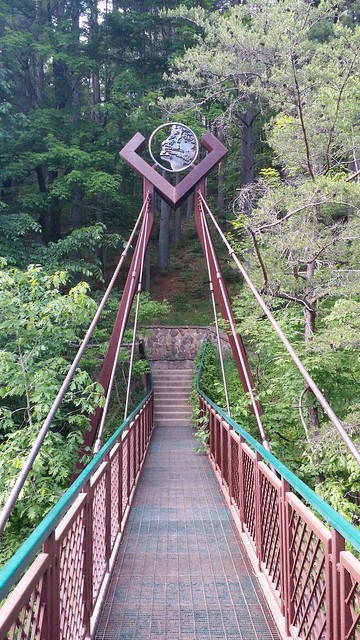 And then hiked up a hill into the woods and recorded some cicada song.

Along the path back to my car there were a group of young dudes debating on whether they should hop a fence and go swimming in the stream below. They were having a serious debate — you might think they were getting up the nerve to talk to some young women — no, just going for an illegal swim.

Crossing back across the bridge I could hear them splash into the river below. I thought “good, they’re living life, and taking chances as they should”.