On June 12th, 2017, I found myself in Baraboo, Wisconsin looking for periodical cicadas, attempting to verify their existence in that city. I found no cicadas, but I did discover the Circus World Museum/historic site. Driving past Circus World, it didn’t seem that compelling: the buildings were bland and seemed unexceptional.

I parked across from the museum so I could inspect the trees in a park for cicadas — from that vantage point I could see into the grounds of the museum — I could see an elephant, a circus tent, and trains of circus wagons. That was enough to make me think “okay, that looks interesting, I’m here, I’m not finding any cicadas, so I might as well go inside”.

Perceiving the value of something often requires a new perspective.

One hundred years ago circuses had a lot less competition — no Internet, no video anything, no radio, no plenitudes of delicious foods, no giant amusement parks, no touring rock, country, or rap groups, no NASCAR, no air conditioning, or easy to obtain birth control. If you lived in a rural community 100 years ago, and the circus came to town, you went to the circus. You put down your hammer, gathered up your kin, and went to see “the greatest show on earth”.

Enter the circus tent, and you enter an alternate dimension. The circus represents a mirror world. Each ring, or circle (circus), is a mirror laid flat, in which a distorted & amplified view of the ordinary world appears. At the circus, ordinary animals, like dogs, horses & bears perform tricks; extra-ordinary animals from foreign lands, like monkeys, elephants, tigers & lions, appear in the flesh; mysterious humans of extreme dimensions, attributes, and skills amaze inexperienced minds; clowns — representing everything an adult is not allowed to be: silly, playful, foolish, loud, colorful, outlandish — pour from tiny cars to delight child and adult alike.

I have to imagine this experience was quite healthy for the spirit, mind, and even body. The circus comes to town and takes you away from the day-to-day grind of a difficult life; it makes you laugh; it shows you sights you might never otherwise see; it blows your mind. The circus picks you up in its primary-colored arms and shows you the truth of what the world is, and what it can be. It offers the gifts of joy and perspective. And maybe you can have an affair with the strongman or tattooed lady.

The modern world has few mysteries. The Internet offers millions of hours of footage of ordinary & rare animals performing tricks. Want to see an extremely tall man fly through the air? Just turn on ESPN. The “Tattooed Lady”? She’s your best friend. Are adults behaving like clowns? They’re everywhere today (perhaps they always were). We have entered the mirror world.

Today we have no need for the Circus because we have 24/7 access to the amazing & mysterious, silly & insane. As Madge would say “you’re soaking in it”. And because we’re inside it, we’ve lost some perspective.

So what about Circus World?

Considering Circus World as a whole, the bland exterior works perfectly. At that point, the visitor is outside the circus. Even the entrance to Circus World is unexceptional — a simple gift shop and ticket booth and bathrooms. But one step beyond these operational necessities, you enter the Circus World. Bright lighting and white walls, switch — in an instant — to shadow and spotlights illuminating circus scenes and artifacts: a maze of brightly-colored circus posters and banners; elaborate displays of mannequins (human & animal) donned in glittering circus attire. Visions of the circus, frozen in time. But it only gets better once you step outside.

Once outside, you have two options: 1) make a right and explore, what I’ve called the “bland” and “unexceptional” buildings, or 2) cross the river and enter the circus world. I chose to ease into it and headed for the buildings.

Have you ever met someone who looked totally ordinary — plain clothes, common haircut, average physique — and had them tell just the most amazing story about their life? I have. Some people and some things look ordinary, only to contain and protect what they hold inside. It turned out that the buildings visible from outside Circus World once held circus equipment and animals from every continent — while they appear ordinary and utilitarian, they were built to hold the heart of the circus itself. Today these buildings continue to house treasures — each is a museum to an aspect of the circus. One holds massive and detailed dioramas depicting circus performances and circus train yards. Another holds a museum of famous clowns and clown equipment. Another feature is the costumes of circus performers from around the world. Another has tributes to famous circus animals, like Silver King, the most famous circus horse of all time.

Back outside, and across the river, and you’ve entered the living circus. There you’ll see the circus tents, elephants, and horses, and performances by acrobats, clowns, and Ryan Holder and his magnificent family of captive bread Bengal-Siberian tigers (I pulled that last sentence from their website). The performances are so good, you’ll probably forget to take a photo as I did. Plenty of delicious carnival foods are available as well.

The circus wagons were my favorite exhibit at Circus World. The grounds of the museum feature dozens of these ornately shaped, colored, and decorated wooden wagons that once held glamorous circus performers, exotic animals, and yes, even clowns and equipment. Some wagons featured bars to allow folks to see the animals inside. Some contained complete, automated musical machines — steam-powered calliopes that played the loud, festive, and other-worldly music of the circus. There are even buildings where the wagons are restored and repaired — it must take great skill to preserve and replicate the amazing carved woodwork of these wagons. Pure whites, blood reds, rich golds and silvers, fiery oranges, uncommon blues, and the occasional John Deere tractor green, gilded with gold, of course — the colors of these wagons stand out from the beiges and grays of the ordinary world. 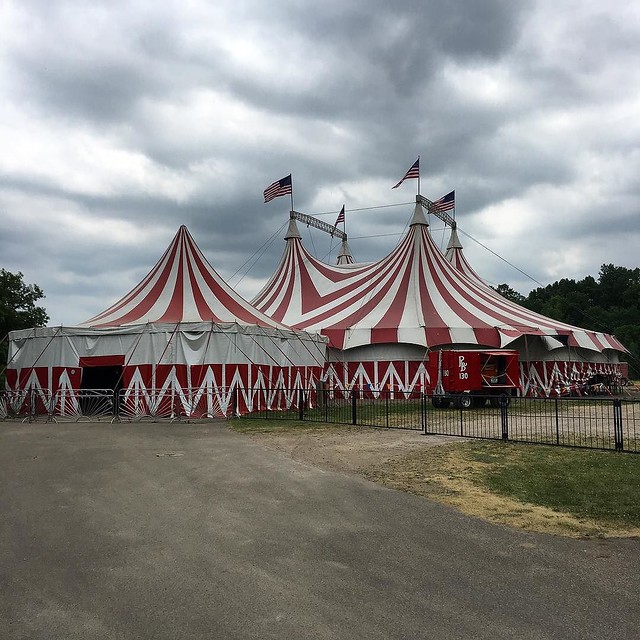